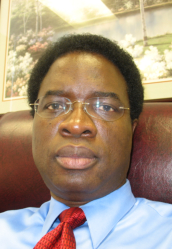 Dr. Paul O. Otubusin is a Partner at the law firm of Otubusin & Otubusin in Chicago, Illinois. Dr. Otubusin is admitted to the Bar in the State of Illinois and has had over thirty (30) years of experience practicing as a lawyer.

He handled a commercial breach of franchise contract in the Federal District Court in Detroit, Michigan: Happy’s Pizza Franchise, LLC v. Chicago Partners #78, LLC., Harvey Holdings #79, LLC et al. [Case No. 2:2013 cv 11910] wherein the Defendants, his clients, prevailed over the Plaintiff in a 37 page published Court Opinion by Judge Sean F. Cox denying the Plaintiff’s Motion for Summary Judgment.  Likewise he represented the Plaintiff in a jury trial in the Circuit Court of Cook County, Chicago, Illinois in the case of Comer v. United Quick Transportation [Case No. 09 L 12120] resulting in a favorable six figure jury verdict for his client. He also represented the Plaintiff in a highly contested wrongful imprisonment civil rights case in the United States District Court, Chicago, Illinois in the case of Williams v. Village of Calumet Park et al. [Case No. 15 cv 5198] resulting in a favorable six figure settlement for his client.

Dr. Otubusin is Professor Emeritus of Philosophy, Calumet College; former Professor and Chairman of Philosophy Department, Calumet College, Indiana; the author of several scholarly books and articles; former Consultant on Ethics to Governors State University, University Park, Illinois, and a former Ethicist on the Ethics Review Board of St. Catherine’s Hospital, East Chicago, Indiana. He previously taught at Loyola University of Chicago and Northeastern Illinois University, and has served as Educational Consultant to Pane Consulting Group of Chicago.

A respected leader in his field and a notable speaker, Dr. Otubusin is listed in The Who’s Who of American Business Leaders, The Who’s Who in Executives and Professionals, The Who’s Who in Executives and Business, and The Who’s Who Worldwide. Among his several books are Exploitation, Unequal Exchange and Dependency: A Dialectical Development; Battered Women Syndrome: A Critical Study and Assessment; Classical and Contemporary, Moral Issues; On the Nigerian Quandary: Dr. Otubusin’s A-Z Manifesto Superstructure, etc. Some of his articles include: “Winning Personal Injury Cases,” “Facts on International Trading of Goods,” “Selecting a Legal Entity in Business,” “What You Should Know About 501[c] Corporations,” “You and White Collar Crimes,” “Strategic Defense in a Narcotics Charge in Federal or State Court” “What You Should Know About Personal Bankruptcy,” “Obtaining the Permanent Resident Status,” “Technological Dependence and Underdevelopment,” “Torts in Computer Transaction,” “Computer Crimes,” “The Millennium Bug and Litigation Bonanza,” “Legal Requirements and the Incentives on Doing Business in African Countries,” etc.

Cozette is proficient and knowledgeable in the different practice areas such as personal injury, family law, medical malpractice, litigation, bankruptcy, corporate law, employment discrimination, probate and real estate. She is adept in legal researching and drafting pleadings as they relate to all pretrial motions, motion to dismiss, motion for summary judgment, judgment on the pleading, etc.

In December 2015, Cozette received a B.A. degree in Criminology, Law and Justice from the University of Illinois at Chicago, Illinois. She received her Juris Doctorate (JD) degree from Chicago-Kent College of Law of the Illinois Institute of Chicago in May 2019 and her Master of Business Administration (MBA) degree from Stuart School of Business of Illinois Institute of Technology in May 2019. She passed her Illinois State Bar Examination on April 3, 2020 and was called to the State of Illinois Bar on March 23, 2021.

Ubi has tried over 40 jury cases to verdict defending individual and corporate clients in state and federal courts and at over 100 binding and non-binding arbitration hearings. Ubi has obtained several not guilty verdicts at trial for his clients in various Illinois state courts and has obtained several favorable outcomes disposing of cases at arbitration or through dispositive motion practice.

Mr. Emeziem received his undergraduate degree in Economics from Imo State University, Nigeria, and his Juris Doctor Degree from University of Minnesota School of Law. He also has a masters degree in Health Care Administration from Walden University. He is a member of the California State Bar, is admitted to practice before the Central, Eastern, Northern and Southern District Courts of California, and the United States Court of Appeals for the Ninth Circuit. He has handled cases before the United States Ninth Circuit Court of Appeals and the California Court of Appeals which have been published.